The rare Araguaian river dolphin is a mysterious creature native to Brazil which researchers have long thought to be solitary. Because of this assumption, it was believed that the animals would not be capable of complex communication, given that their social structure does not require it.

But now scientists from the University of Vermont have discovered that the dolphins do interact with one another and can make hundreds of different sounds for the purposes of communication, according to a study published in the journal PeerJ. 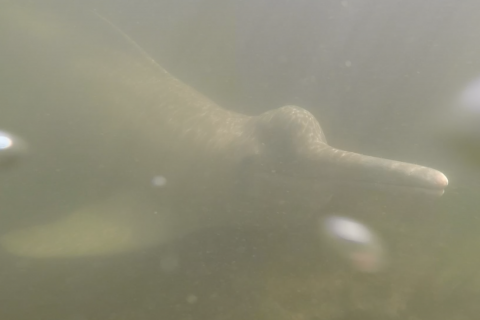 “We found that they do interact socially and are making more sounds than previously thought,” Laura May Collado, a biologist at the University of Vermont, said in a statement. “Their vocal repertoire is very diverse.”

Little is known about the Araguaian dolphins, also known as botos, because they are hard to find—as well as being difficult to approach—thus studies about them are limited. They only live in the waters of the Araguaia and Tocatins rivers and their numbers likely do not exceed more than one and a half thousand in total.

Fortunately, the research team was able to find a fish market in the town of Mocajuba where the dolphins often visit because people give them food.

Here, the team used underwater cameras and microphones to record the sounds and interactions between the dolphins at the market. In addition, they also took some DNA samples from the animals.

Gallery: The Most Fascinating Facts About Dolphins (Redbook)

Overall, they captured around 20 hours of recordings, identifying 237 different types of sounds. But even with nearly an entire day of material, the team speculate that the dolphins can produce more sounds than they recorded. Many of the sounds were short, two-part calls, which baby dolphins made when approaching their mothers.

“It’s exciting; marine dolphins like the bottlenose use signature whistles for contact, and here we have a different sound used by river dolphins for the same purpose,” Collado said. 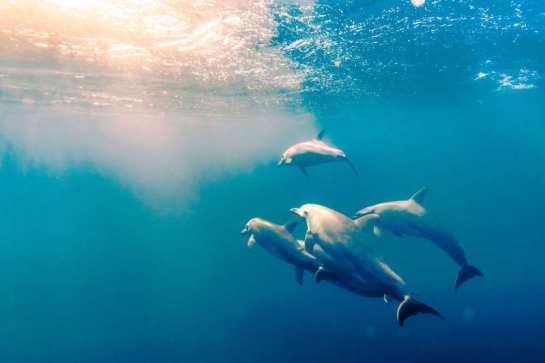 The scientists also recorded the dolphins making longer calls and whistles, but these were not so frequent, and it is currently unclear what their purpose is. In bottlenose dolphin communication, longer whistles are used to boost group cohesion. But the researchers think the botos may use them for the opposite reason—to maintain distance.

The team say that the frequency of the river dolphin calls were somewhere between the low-frequency sounds made by baleen whales to communicate over long distances and the high-frequency calls used by marine dolphins over short distances. Collado suggests that the acoustic characteristics of their calls were likely influenced by the river environment that they live in.

“There are a lot of obstacles like flooded forests and vegetation in their habitat, so this signal could have evolved to avoid echoes from vegetation and improve the communication range of mothers and their calves,” she said.

The Araguaian dolphins were only identified as a distinct species in 2014, differentiating them from their close relatives—the Bolivian river dolphin and the Amazon river dolphin. While the classification of Araguaian botos is still up for debate, Collado notes that calls between the species show significant differences—Ecuadorean Amazon river dolphins are very quiet, for example.

“We need more information on these other species and more populations,” she said. “Why is one population chattier than others and how do these differences shape their social structure?”

Lover and enthusiast of all things nature and animal related. Professional Dolphin Trainer from the Caribbean. Adviser and mentor in the Marine Mammal field. View more posts